Must-visit lists based not on a single city, but an entire country can seem quite overwhelming, but it is possible. This list for South Korea is perfect for the easy-going backpacker.

When travelling in South Korea no matter how much or little time you have then get the KTX-rail ticket and travel from North to South, West to East of the country. Don’t miss any breathtaking experiences and enjoy the country’s great food, history, culture and national parks.

Here is a must-visit list of places to see and things to do in South Korea so as to experience as much as possible.

The Korean Demilitarized Zone (DMZ) is an area between North and South Korea which divides the two countries and is one of the most heavily guarded places in the world. The DMZ is a must-visit, specifically in combination with one of the four tunnels (discovered thus far!). The tunnels were designed as a surprise attack by North Korea and are now tourist attractions, though heavily and securely guarded by South Korean military. Because photography within the tunnels is prohibited, a personal visit is recommended.

TIP
A good way to experience the Demilitarised Zone is through a tour, which will help you learn more about this zone and the conflict.

When it comes to historic sightseeing in Seoul, the possibilities are endless. Palaces, villages and landmarks are everywhere.

Here are 3 top recommendations on what to see:

South Korea is home to 22 national parks (as of 2016). The Bukhansan National Park in Seoul is very mountainous with its highest peak being at 836,50m (2,744ft). The park contains forested areas, temples and is cherished by hikers and alpinists alike. But soon, the name Bukhansan (Three Peak Mountain) might be reverted to Samgaksan (Three Horn Mountain) which is what the mountain is known and valued by citizens, religious leaders, Korean Mountaineering League and many more.

Seoul’s nightlife is filled with opportunities for foreigners and Koreans to engage. As the evening turns into night, shyness from both parties pretty much dissolves and interactions begin. The two biggest areas for nightlife are Itaewon and Hongdae.

Within Seoul you can already experience a lot of Korea’s breathtaking nature. Despite being a city with a population of 10 million it is possible to find remote areas for peace and quiet.

Here are 3 top recommendations on what to see:

Busan is South Korea’s second-largest city with a population of approximately 3.5 million inhabitants. Some refer to Busan as the smaller version of Seoul, others beg to differ, and the latter is recommended. Also known as the Summer Capital of Korea, the southeastern coast of Busan offers beaches, fresh seafood, landmarks and temples. Compared to Seoul, the hustle and bustle in Busan is toned down, so it’s easier for foreigners to grasp cultural aspects. To get here use the Korea Train Express (KTX) which is a highspeed railway line that commutes from Seoul to Busan in around 160 minutes.

Busan is the proud proprietor of…

Temple Stays have become more popular for foreign tourists across Asia and South Korea is no exception. Korean Buddhist Culture and History are taught by the monks themselves and it gives participants the opportunity to experience Buddhism in the sense of “learning by doing”. A Temple Stay can vary from a one day course to a couple of weeks, depending on the temple and season.

Jeju Province (better known as Jeju-do oder Jeju Island) is one of the nine provinces of South Korea and the nation’s largest island. It’s located south-west of the mainland and can be travelled to by ship or plane.

Because the island had been quite isolated and under the occupation of other nations during wars, Jeju has developed and maintained their own culture, language and local legends, such as the “stone grandfather” – God’s offering for fertility and protection. Because of their reserved demeanour, tourism is one of Jeju’s highest income, and the island is a very popular destination for mainland Koreans to travel to for their holiday and honeymoons.

Delicacies mostly found on Jeju include seafood, black pig (their meat differs by its chewy texture) and their very own orange. Driving from town to town, you’ll find countless orange farms so consider pulling up and asking if it’s okay to pick some. Most farmers already have bags and pruners ready, allowing people to choose and pick their own fruit and charging for each bag filled.

Also on the island is Hallasan, which is the highest mountain not just on Jeju Island, but all of South Korea at 1,947 m (6,388 ft). Hiking to the peak is beautiful in every season.

You may also like:
Unmissable Experiences to Have When Visiting Jeju Island
Tours and Activities

Juliana Gräfin Széchenyi is a young striving novelist at the age of 23. She has already lived in five countries, the sixth on the way – and has visited many more. Travelling is her passion and sharing her experiences with others is how she meets new people, learns their languages and about their culture. 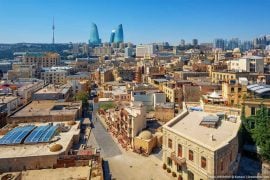 10 Highlights to See in Azerbaijan

Japan Travel Itinerary: What to Do on a 2-3 Week Trip

10 Best Things to See and Do in Hiroshima (Japan)