With its combination of electrifying activities and dramatic natural backdrops, New Zealand has rightfully earned a reputation as one of the most significant travel destinations for thrill-seeking and outdoor-minded travellers.

From high in the sky to the crevices of the earth, in any type of environment in this Pacific nation, you can get your travel kicks. Here are 10 of the best adventure activities you can do in New Zealand.

Skydiving in New Zealand is top of the list for many adventurous travellers, and if you’re soaring over the wondrous landscapes the country possesses, it quickly becomes apparent why. Many skydiving operators all over the country take you to elevations of either 9,000, 12,000 or 16,000 feet with a small aircraft. Skydiving is not for the faint-hearted though, as from the minute you jump it is nothing less than a hair-raising freefall. Once the instructor right behind you has deployed the parachute, you can soak up the most magical views of New Zealand’s natural wonders.

Fox Glacier in the Westcoast region is one of the best places to go skydiving in New Zealand, as the ice masses and towering peaks of the Southern Alps envelope under your feet as soon as you jump from the plane. You’ll even be able to admire Aoraki, or Mount Cook, New Zealand’s highest mountain at 3724 metres. Lake Taupo is another epic location, as you’ll see the biggest lake in the country and the staggering volcanic summits in Tongariro National Park.

If you’ve always wanted to wander around in the blue world of mysterious ice caves and cracks, then New Zealand is a lovely place to fulfil that dream. The South Island packs plenty of ice tongues that cover the slopes of the highest mountains of the Southern Alps.

Armed with a pickaxe and shoes with spike crampons, you can see the ice masses up-close, go down into the cracks, and discover a world that normally would be hidden.

Premier glacier hiking can be found at Fox Glacier and Franz Josef Glacier on the Westcoast. Most glacier tours are so-called Heli Hikes. You’ll be brought to the most scenic hiking areas by helicopter, after which the guide will lead you through a magical icy labyrinth of caves, arches and ravines.

One of the early pioneers of bungee jumping, A.J. Hackett, is from New Zealand, and the country has used its long-gained expertise on this extreme sport to set up heaps of bungee jumping locations across the country. The most spectacular and highest bungee jump in New Zealand is the one above the Nevis River in the South Island. With a height of 134 metres, this jumping location 40 kilometres east of Queenstown allows you to experience a freefall of 8.5 seconds. The clear Nevis River and the mountains of the Otago region form a magnificent decor for a bungee jump.

If you wish to get your bungee thrills in a more urban setting, it’s possible to jump in New Zealand’s largest city Auckland. Although not as high as the one at Nevis River, a bungee jump from Auckland Harbour Bridge certainly is one for the books.

Where there are mountains, there are roaring rivers, and New Zealand is no exception to that rule of nature. On both the North and South Island of New Zealand you can ride the thundering rapids and falls in numerous rivers. Therefore you don’t have to make a hard decision if you want to go rafting but only have limited time. The routes vary from family-friendly to challenging.

For those who are down for a challenge, the white water rafting on the Rangitata River in the Canterbury region would be a top choice. With the alpine scenery of the centre of the South Island and grade five rapids, the Rangitata River makes for an exciting ride.

Another – more famous – spot on the South Island is the Shotover River near Queenstown, where you will be rocked by intense rapids in a narrow canyon.

Unlike many other rafting locations, the Kaituna River between Tauranga and Rotorua on the North Island is mostly loved for its waterfalls. It might sound daunting to raft from a waterfall, but it happens on the kaituna River. One of the highlights of a rafting tour here is a 7-metre drop from the Tutea Falls. The stunning route travels along a lush rainforest, which makes the rafting here incredibly scenic.

Not all rivers are wild and untamed, which opens the door for another cool adventure sport to try in New Zealand: kayaking. If you’re a kayak fanatic, the Whanganui Journey is the holy grail of paddling. This route, which is strangely enough one of the country’s 10 Great Walks, goes on for 145 kilometres and shows you fantastic gorges and hilly landscapes in the southwest of the North Island.

Another fun activity is sea kayaking, and excellent places to venture for the open water include the Coromandel Peninsula and Abel Tasman National Park. In the first place, you’ll have close encounters with the majestic Cathedral Cove, or you can park your kayak at Hot Water Beach to dig out your own hot pool.

Abel Tasman National Park is praised for its pristine coastlines and mild climate year-round. Therefore, this reserve in the north of the South Island serves as an ideal place for an expedition on the water. 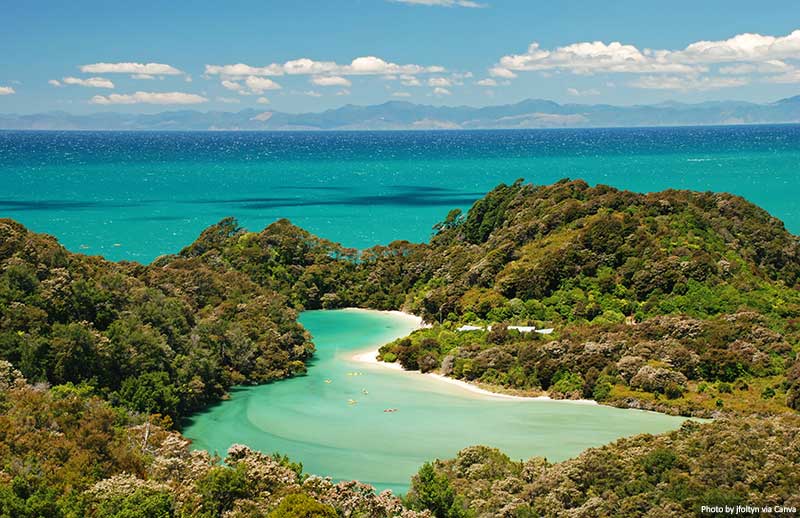 Thousands of marked trails through alpine environments, wetlands, rainforests, and the most spectacular coastal areas put New Zealand on the bucket list of many hikers. Whether you’re looking for multi-week walking adventures or a quick stroll on a nature trail, this country pleases hardcore walkers. If you’re planning to take your hiking exceptionally serious, you can attempt to tackle (parts of) the Te Araroa trail, a 3000-kilometre route from Cape Reinga in the far northwest to Bluff in the far south.

For shorter, but by no means, less memorable tramps, finish one or several of New Zealand’s Great Walks, which generally can be completed in 3 to 5 days.

Some of the most amazing short walks that take a couple of hours or less are the Hooker Valley Track with views of Mount Cook, the walk from Hahei to Cathedral Cove on the Coromandel Peninsula, and the Lake Gunn Nature Walk in the enchanting Fiordland region. 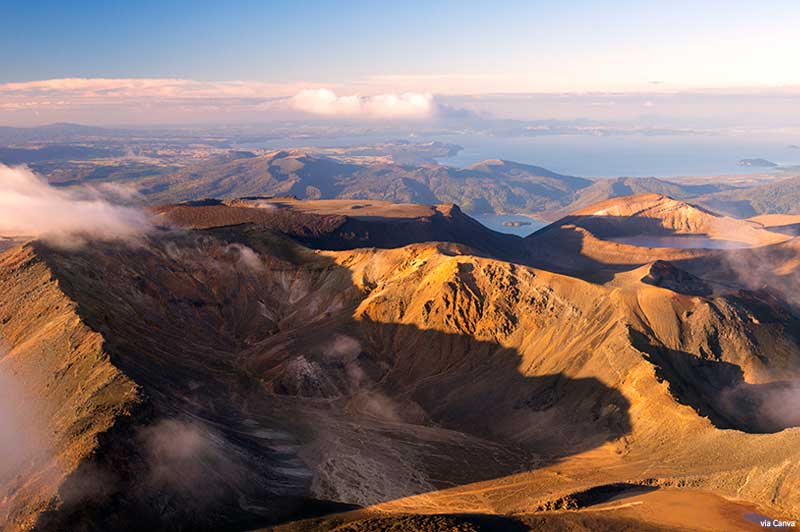 With a canyoning trip, you get to swim, scramble, and jump in the clearest water imaginable. The best location to combine several sports in one tour is Mount Aspiring National Park in the South Island, an untouched reserve that can be reached from Queenstown and Wanaka. On a guided tour, you’ll get to do abseiling from waterfalls, rock climbing, and plunge in the water in stunning canyons.

In the North Island, the Coromandel Peninsula is a fantastic location for some heart-pumping canyoning. A journey through the so-called Sleeping God Canyon indulges visitors in an adventure of sliding down waterfalls, abseiling and cliff jumping, right in the mountainous heart of the peninsula.

The coastal waters of New Zealand are teeming with marine life, from elusive penguins and the mighty albatross to enormous whales that call the Tasman Sea and the Pacific Ocean their home. Although Auckland might not seem the perfect spot for animal lovers, the Hauraki Gulf spreads out just north of the city and is full of wildlife. Here, over 20 species of whales and dolphins roam throughout the year, including Bryde’s whale and Pygmy blue whale.

Kaikoura, on the South Island, is a whale hotspot where you go on boat tours as well. Kaikoura is home to the giant sperm whale, and while you’re on board, you could see seals, dolphins, and a rare albatross floating in the sky.

New Zealand has been shaped by volcanoes, and the craggy landscapes show signs of that powerful process everywhere in the country. Mountain bikers will feel right at home on the designated trails all around, from the pine forest tracks in the Waitangi area in Northland to the routes on the panoramic crater rim of Port Hills, near Christchurch. Just like the tramping trails, the biking routes range from easy loops to very demanding circuits with lots of elevation changes. In the South Island, Queenstown and Wanaka are a paradise for bikers, with an abundance of marked trails and jaw-dropping natural scenery.

In the North Island, the enchanting Whirinaki Forest provides excellent decor for a bike session, and so does the Tongariro River south of Lake Taupo.

Although New Zealand’s winters aren’t as harsh as in some other places, the hovering peaks, high precipitation in winter and cool climate turn some slopes into giant playgrounds for those who are into winter sports. New Zealand has formidable areas for skiing and snowboarding, and lots of explorers hit the slope near Queenstown – the adventure capital of the country. The Remarkables mountain range is not just featured as the Misty Mountains in The Hobbit movies, but it’s also an exceptional location to hit the slopes and test your skills in the snow. Mount Hutt can be added to the list of prime winter sports locations on the South Island.

The Alps only cover the South Island, but the North Island can’t be overlooked when it comes to snowy thrills. Mount Taranaki is the perfect fit for experienced snowboarders and skiers, while the slopes around Mount Ruapehu extend from beginner-friendly to advanced.

Regardless of what adventurous activities you’re after, you can travel to New Zealand during any season and have a breathtaking blast in nature. And if you’re afraid of extreme stuff like bungee jumping and skydiving, there are plenty of nifty experiences left on solid ground.

10 Best and Most Beautiful Places to Visit in New Zealand

10 Things to Do in And Around Queenstown (New Zealand)