The wild and breathtaking continent of Africa is home to some of the most amazing wildlife and awe-inspiring scenery on the planet. The circle of life is in full view as you watch mighty elephants, graceful giraffe and regal lions in their natural habitat. Africa offers some of the world’s most magnificent national parks and you can see first-hand, thrilling animal encounters that is a once-in-a-lifetime experience. Read on to see which parks made our 10 best and must-see national parks in Africa.

There is no doubt that Kruger is the king of all African safari parks. It’s one of the ultimate safari destinations in the world and also your best chance to see the “big five” up close and personal.

The park is located in northeastern South Africa in the provinces of Limpopo and Mpumalanga and is huge—over 7,000 square miles in area. The park has been around for nearly a century and attracts thrill seekers from all over the planet. To sleep right in the middle of the action, andBeyond Ngala Safari Lodge is a perfect fit for families as well as first-time and returning travellers. A walled courtyard provides a sheltered space to indulge in first-class cuisine, while the boma (a traditional African enclosure) creates a stunning setting for fire-lit dinners.

One of the top parks to visit in East Africa has to be the Maasai Mara with its vast grasslands that make up the Mara ecosystem. The park actually shares a border with its sister park, the Serengeti, just over the border in Tanzania.

If you want to witness the great migration, visit the park in June where you can witness the unexplainable phenomenon where one million wildebeest show up to graze and mate. The Masai Mara is one of the few parks in Africa where you have a good chance of seeing the big five on one game drive. If you are near the river, just be prepared to witness crocodiles enjoying a feast in this target-rich environment.

You May Like:
Quick Guide to Visiting Nairobi, Kenya
ADVERTISEMENT
CONTINUE READING BELOW

Serengeti National Park in Tanzania is home to the oldest ecosystem on Earth. It is the ideal African savannah experience that comes complete with acacia trees and wild animals that roam the huge open plains of East Africa.

In addition to the Big Five, the Serengeti and the Ngorongoro Crater area are home to one of the great natural wonders of Africa–the Great Wildebeest Migration. This annual event where millions of game animals like wildebeest and zebra come to the region in search of fresh pasture.

This is also lion country. It is said that the Serengeti is home to the largest population of the “King of the Beasts.” The best place to watch all the action is at the water’s edge where lion and crocodiles complete over the fast-moving food sources.

If you want a park that is great for a self-drive safari and are also looking for a great deal, then you have to check out Namibia’s Etosha National Park. Here you can get a day pass for 4.5 Euros and have access to some amazing wildlife, including 4 of the 5 Big Five. Because Namibia is so dry, the animals will congregate around the natural and man-made watering holes, giving you a chance to see the animals up close and personal.

The great salt pan dominates the landscape and the name Etosha is Ovambo for “great white place.” This amazing park is a great choice because the roads are very well maintained, it’s far less crowded than popular parks like Kruger and there are some amazing safari lodges to choose from.

You May Like:
Best Things to See and Do in Namibia

On the edge of the Kalahari Desert, you will find the largest wildlife reserve in all of Zimbabwe—Hwange National Park. You can’t visit Hwange (pronounced Wang-ee) without a stop at iconic Victoria Falls, one of the world’s greatest natural marvels. You will get a chance to travel through a diverse landscape as the Hwange has a mix of semi-desert scrub, forests, valleys of mopane woods and rocky granite hills.

The wildlife is the big draw for visitors to the park. You will get a chance to see lion, rhino, hyena, leopard, and the largest pack of wild dogs on the continent. It’s the elephants that are the stars of the show and Hwange has one of the world’s largest populations of tusked pachyderm.

Amboseli National Park may be the top park on the continent for animal viewing. With elephants roaming the expansive savannah and the snow-capped peak of Mount Kilimanjaro is the distance, you would be hard-pressed to find a more magnificent picture. Amboseli’s is also home to a huge population of the most colourful birds on the planet. The park was originally set up as a reserve for the Maasai so the park is a great place to learn about the Maasai, visit their villages and experience their authentic culture.

Chobe National Park is one of the most popular parks in Africa because of its huge concentration of elephant and Cape Buffalo. There is something primal about the rising and falling of its waters and the daily drama of wildlife survival that is interrupted by the distant roar of the lion or the crazy whoop of a pack of hyenas.

As you glide silently along the Chobe River in a mokoro (a traditional dugout canoe), you’ll get to see incredible wildlife at eye level. If you’re patient you might just spot a terrapin lounging on a floating log, a fish eagle watching and waiting for a meal to swim by, or a herd of elephants cooling off just around the bend. Your mind will probably wander to the mysteries concealed in papyrus reeds swaying gently in the evening breeze.

There is no shortage of safari camps to choose from and since tourism is the prime source of income for Botswana, you can expect amazing accommodation that let you explore the area in style.

The chance to trek through the tropical rainforests of Uganda to get a glimpse of the rare Silverback Mountain Gorilla is a once in a lifetime adventure. The Bwindi Forest in Uganda is your best chance to meet them face-to-face. This lush environment hosts over 400 gorillas in 20 groups, called “troops,” but you will need to plan ahead if you want a chance at spotting these amazing primates; only a few tracking permits are issued each day. Book early and pay up front if you want to secure your chance to come within touching distance of the most amazing primates on the planet.

Bwindi is not just all about the Silverbacks. The park is home to more than 100 species of mammals. If you are lucky, you will come upon a herd of forest elephants, other types of primates and even the rare giant forest hog.

While most of the attention is focused on the national parks of Southern and Eastern Africa, parks in the north of the continent often get overlooked. But there is a crown jewel of a park in Ethiopia that is a must-see stop for anyone looking to experience the wild and mystic beauty of Northeastern Africa.

You won’t find the Big Five here but nestled in the highlands of northern Ethiopia, you will find the spectacular Simien Mountain National Park. This jewel of an area seems lost in time with its remarkable rock-hewn churches and medieval castles. The mountains are also home to a rich cultural heritage that has drawn people here to learn about ancient religious sites, as well as witness the jagged peaks of lava and seemingly endless vistas.

The Simien Mountains are also home to a distinctive ecosystem complete with unique and unusual animals like the Gelada Baboon and Walia Ibex. Once you have reached Ras Dashen, the highest peak, you will be able to marvel at Gondar, the “Camelot of Africa.”

How would you like to camp on the rim of the world’s largest unflooded and unbroken volcanic crater? The Ngorongoro Crater Lodge offers you dramatic and breathtaking views of the Ngorongoro Crater, a place of rare natural wonders that more than earns its status as a World Heritage Site. Even though the Ngorongoro Conservation Area is not technically a national park, it earns a spot on this list because of its sheer beauty and first-rate game viewing year-round. The grasslands surrounding the area boasts Africa’s densest population of lion. Get out your camera and shoot till your heart’s content!

10 Best and Awe-Inspiring Places to Visit in Morocco 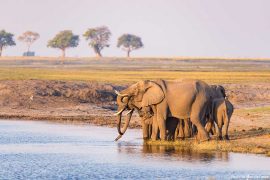 How to Prepare for Your First Safari

We use cookies to offer you a better browsing experience, analyse site traffic and serve relevant advertisements. Read our privacy policy to learn more and how to block cookies and ads. If you continue to use this site you consent to our use of cookies. Links to external sites offering services may be affiliate links where we get a small commission at no cost to you. Ok
Privacy & Cookies Policy
Necessary Always Enabled
26shares