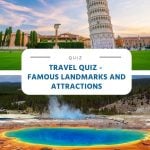 Love your landmarks and famous attractions? Take our quiz and see which ones you know from this selection from around the world. Including both natural and man-made places. Most of the attractions and landmarks are extremely famous attracting millions of travellers each year, whilst some may be lesser-known but are just as impressive.

Below you’ll find the questions. Simply choose what you think is correct from the multiple-choice options. There are 25 questions below. Have fun and no cheating.

Please note that you will need Javascript enabled on your computer for the quiz to work properly! 🙂

1. The Eiffel Tower is a famous landmark you’ll find in which city? 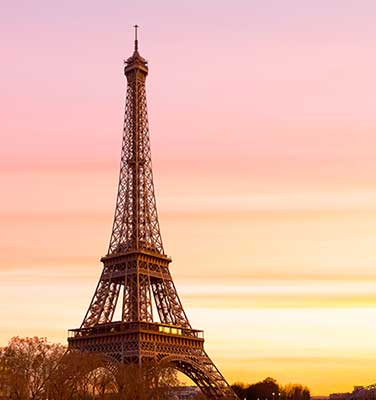 Nice
Lisbon
Madrid
Paris
Located in Paris the Eiffel Tower is now one of the world’s most recognisable landmarks and a must-see for anyone visiting the city.

2. This huge rock known as Uluru is found in which country? 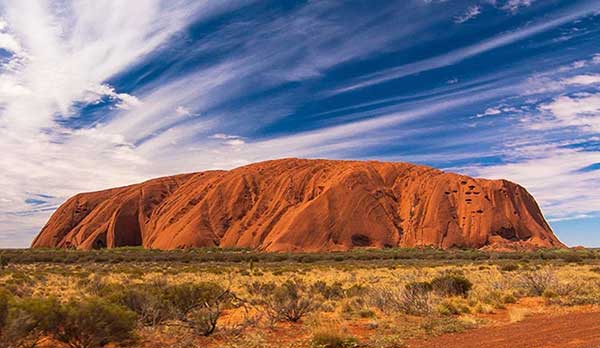 Italy
Australia
Madagascar
Brazil
You’ll find Uluru in Australia. The rock is made of sandstone, rises up to 348 meters and is a sacred landmark to the local Aboriginal people.

3. You’ll find this beautiful landmark in Singapore. What is it called? 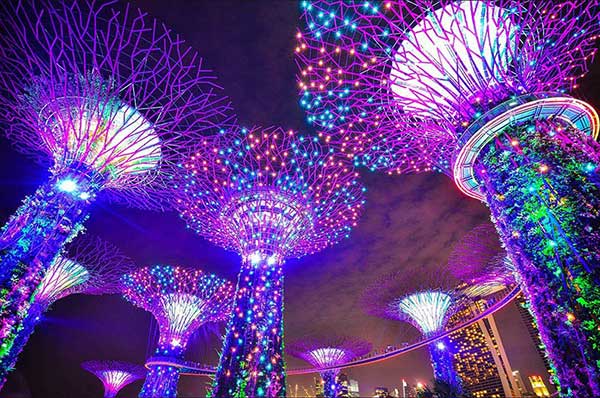 4. Below is the “Christ the Redeemer” monument. Which South American city will you find it in? 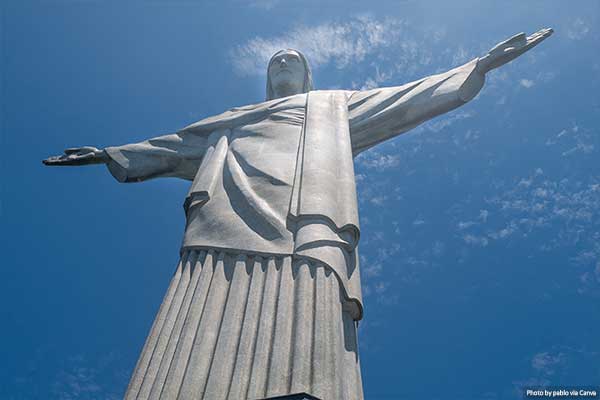 Rio de Janeiro
Santiago
Buenos Aires
Salvador
You’ll find the Christ the Redeemer Monument in Rio de Janeiro. It’s one of the most iconic statues in the world and a must-see when visiting Brazil.

5. Seen below is the stunning Peyto Lake. Which country will you find it? 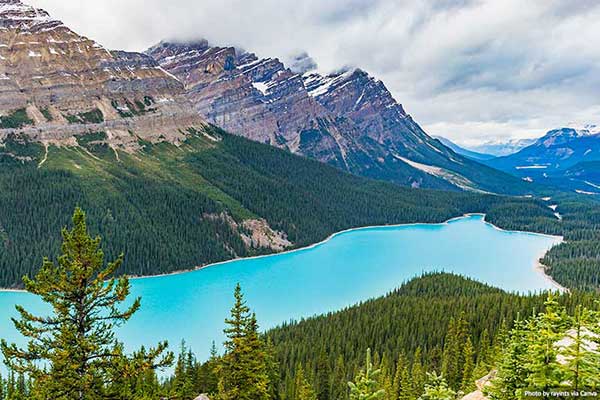 Croatia
USA
Canada
Japan
You’ll find Peyto Lake in the Alberta province of Canada. It’s coloured such due to Glacier flour that flows into it during the summer. We’re sure many would agree that it’s probably one of the most beautiful lakes in the world. Read more about places to visit in Canada.

6. The Sagrada Familia seen below has been in construction since 1882, but where is it? 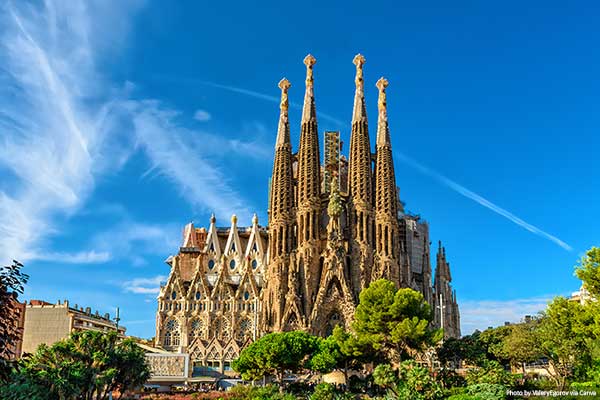 São Paulo
Prague
Madrid
Barcelona
This basilica which you’ll find in Barcelona has been in construction since 1882. Designed by Gaudí the architecture is unique both inside and out and a must-see when visiting Barcelona.

7. What is the official name of this tower which you’ll find in Seattle?

Oriental Pearl Tower
Milad Tower
CN Tower
Space Needle
This landmark is called the Space Needle and was built in 1962. It rises up to 605 feet and offers fantastic views from its observation deck.

8. Currently, the tallest building in the world the Burj Khalifa reaches heights of 830m – Do you know which city it’s in? 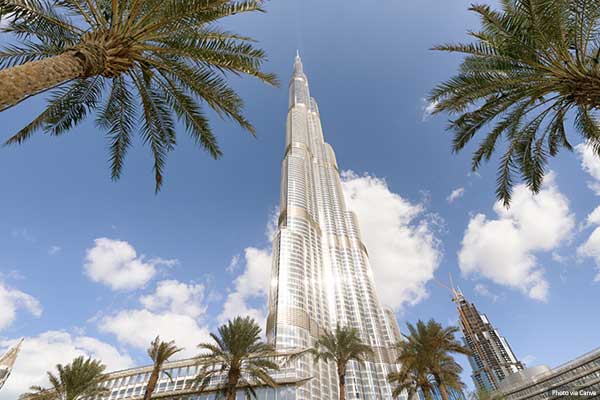 Moscow
Dubai
Muscat
Doha
The Burj Khalifa was completed in January 2004. It is currently the tallest building in the world reaching incredible heights of 830m. You can visit the observation deck at 555m for incredible views for miles in all directions.

9. Once part of an ancient empire, Machu Picchu is a popular landmark you’ll find in which country? 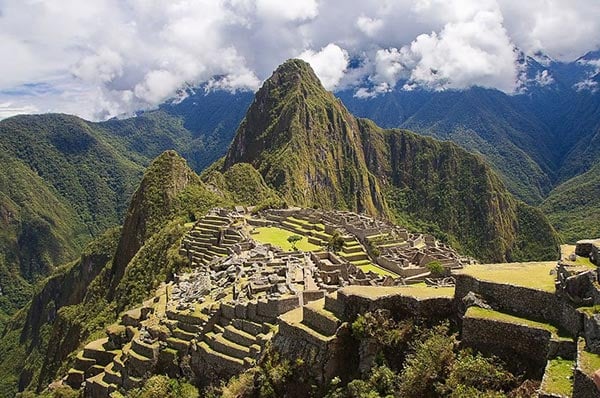 Bolivia
Ecuador
Burma
Peru
Machu Picchu is a hugely popular attraction and you’ll find it in Peru. The sanctuary which you can see above reaches up to 2430 meters above sea level and originates from the Inca Empire.

10. This bridge connects the Lesser Town to the Old Town in Prague. What is the official name of it? 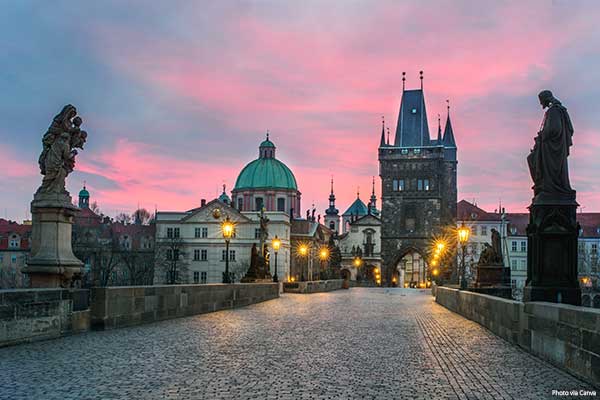 Ponte Vecchio
Charles Bridge
Brooklyn Bridge
Chapel Bridge
The official name is Charles Bridge (Karlův most). It was completed in 1402 to replace a previous bridge that was damaged by flooding. The bridge has been called Charles Bridge since 1870.

11. Where in Egypt will you find these famous pyramids? 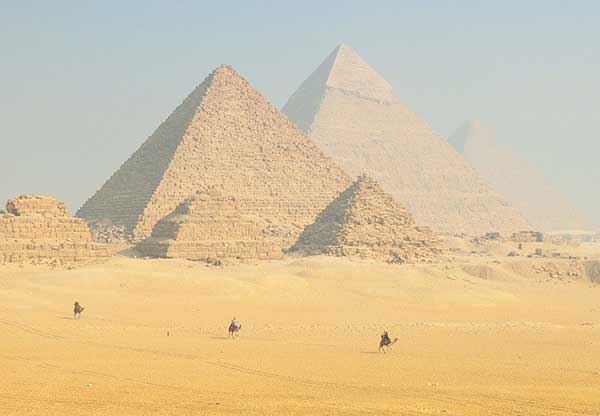 Alexandria
Aswan
Giza
Luxor
Officially called the Pyramids of Giza, they were built around 4,500 years ago. They were built as tombs for pharaohs to prepare themselves for their next life. Discover other highlights to visit in Egypt.

12. This castle in Romania is famously connected to the Dracula novels. What is the name of it? 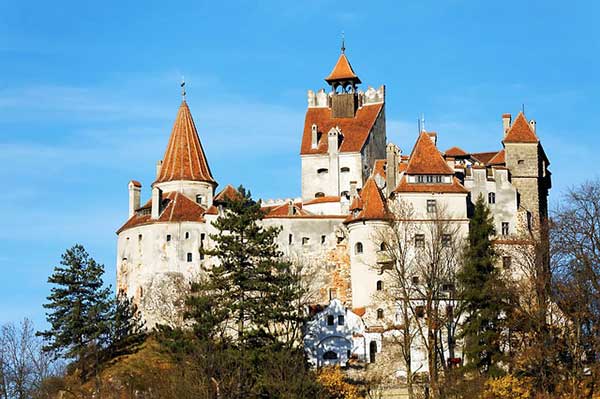 Bodiam Castle
Bran Castle
Glamis Castle
Corvin Castle
This attraction is called Bran Castle which you’ll find it in the Transylvania region of Romania. It is sometimes referred to as Dracula’s castle due to its resemblance to the castle used in Bram Stoker’s Dracula novel.

13. Below is India’s most famous landmark and one of the New 7 Wonders of the World. What is it called? 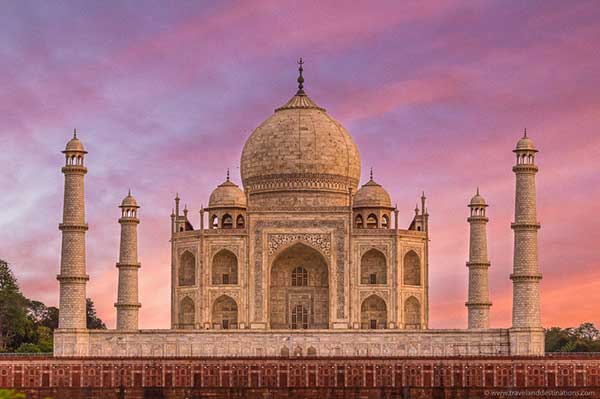 Safdarjung Tomb
Pantheon
Qutub Minar
The Taj Mahal
This is, of course, the Taj Mahal, and one the New7Wonders of the World. Built between 1631 and 1648 you’ll find this incredible landmark in Agra which is a bit south of India’s capital Delhi.

14. This Giant Buddha is found somewhere in China. Do you know which city? 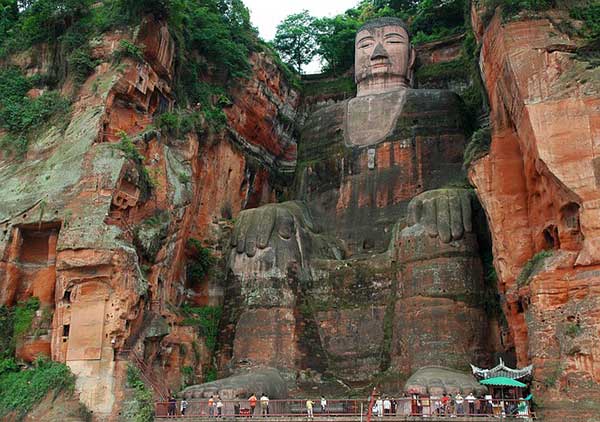 Leshan
Shanghai
Chongqing
Quanzhou
Located in Leshan this Giant Buddha is 71 meters tall. It’s carved into the hillside and is the largest Buddha in the world. Read about the best places to visit in China.

15. This unusual tower is located in Italy. Do you know what it’s called? 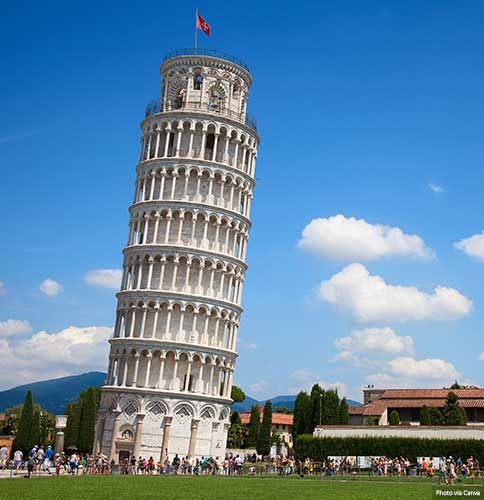 16. Seen is the Grand-Prismatic-Spring. Which USA national park will you find it in? 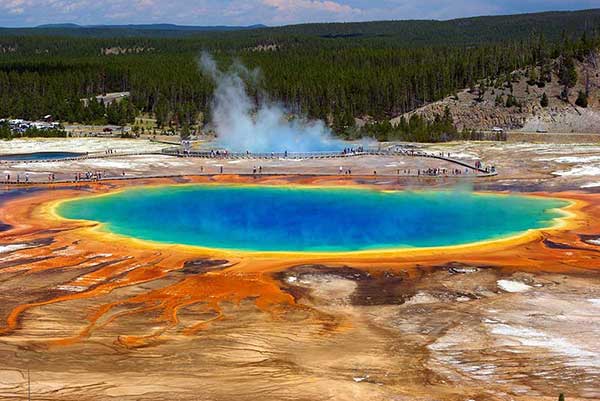 Arches
Yosemite
Yellowstone
Glacier National Park
The Grand-Prismatic-Spring is located in Yellowstone National Park. The spring is extremely deep and the water (which is very hot) travels 121 feet down. Read more about the best national parks in the United States of America.

17. This stunning landmark called Wat Rong Khun (or the White Temple) is found somewhere in Thailand. Do you know where? 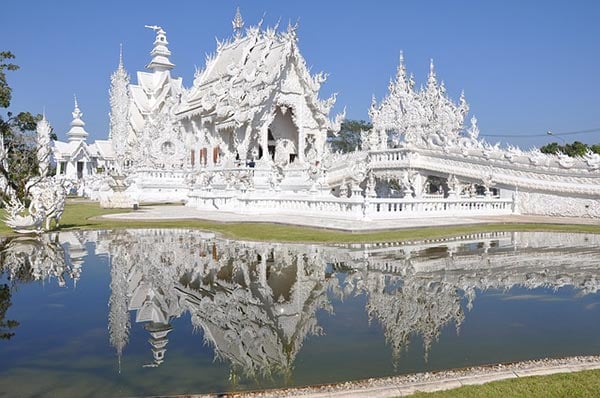 Phuket
Chiang Rai
Bangkok
Chiang Mai
Located close to Chiang Rai in the north of Thailand this beautiful temple is a privately owned attraction created by Chalermchai Kositpipat. With its unconventional white design it’s highly unique compared to most temples that you’ll find throughout the country.

18. These ancient rocks have been a mystery for centuries. They are located in England. What are they called? 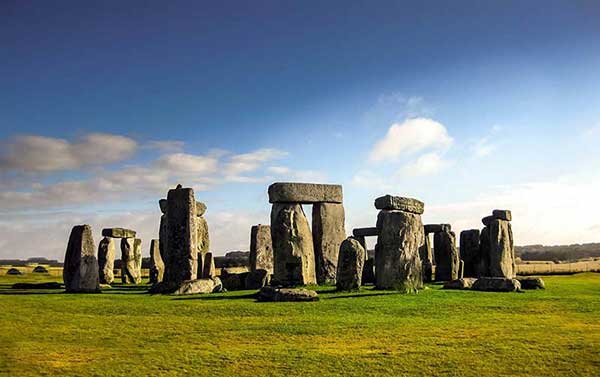 Old Harry Rocks
Stonehenge
Balancing Rock
The Pillar Rocks
This historic landmark is called Stonehenge and was built around 5000 years ago. The stones which are positioned in a circle weight up to 30 tons.

19. This cool and unique architecture is found in a city in the Netherlands. Which one? 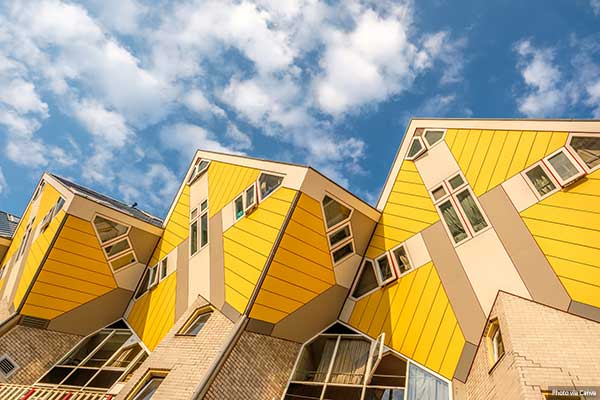 The Hague
Amsterdam
Netherlands
Rotterdam
This unique architecture is a great attraction which you’ll find in Rotterdam. They were created by Dutch architect Piet Blom and include cubes which are tilted at a 45-degree angle. Read about cool cities to visit in the Netherlands.

20. Lake Wanaka is a natural landmark famous for the tree that sticks out from the water. Which country will you find it in?

Italy
Georgia
New Zealand
Malaysia
You’ll find Lake Wanaka in the South Island of New Zealand. It’s incredibly popular with photographers all looking to capture an image of the tree in the lake.

21. This beautiful parliament is located in Europe – Do you know the city? 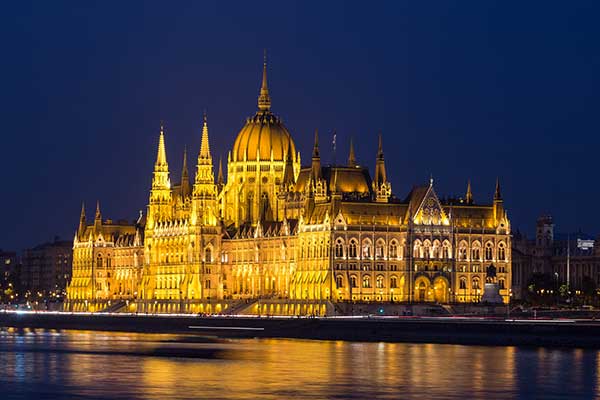 Vienna
Budapest
Bucharest
Paris
This is the Hungarian Parliament which you’ll find along the River Danube in Budapest. It’s probably one of the most beautiful parliament buildings in the world.

22. Angkor Wat is an ancient temple located in Asia – Which country will you find it in? 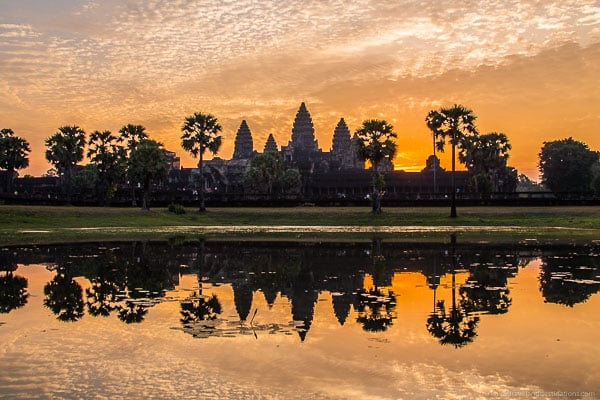 23. This waterfall is part of a group of waterfalls that border Canada and the USA. What are these waterfalls called? 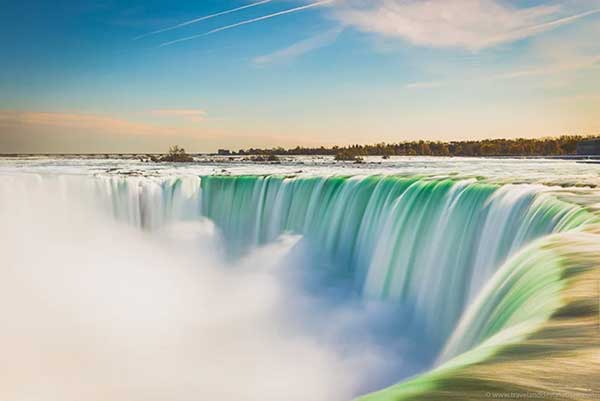 Niagara Falls
Victoria Falls
Iguazu Falls
Gullfoss Falls
This is the Canadian Horseshoe Falls which forms part of Niagara Falls. The other waterfalls of Niagara Falls include American Falls and Bridal Veil Falls.

24. You’ll find this beautiful tower in Japan. Do you know which city? 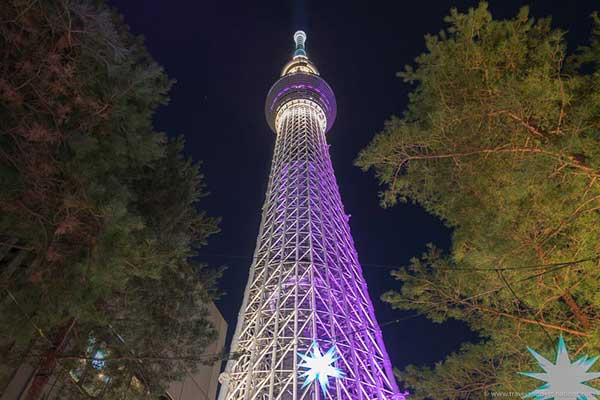 Hiroshima
Osaka
Kyoto
Tokyo
This is the Tokyo Skytree, a wonderful piece of architecture. It reaches up to 634m and is one of the tallest towers in the world. Read more about famous towers around the world.

25. What is the name of this famous landmark that you’ll find in Northern Ireland? 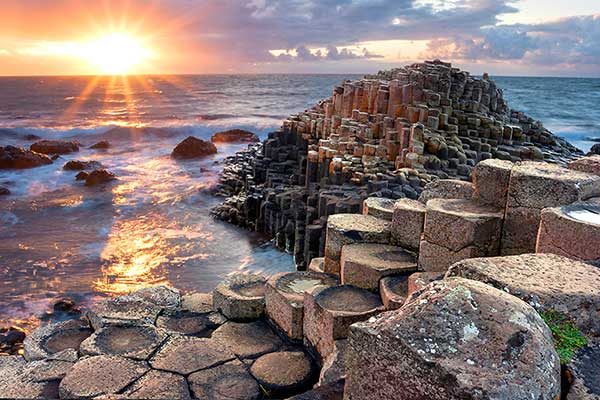 Big Sur
Cliffs of Moher
Twelve Apostles
Giant’s Causeway
Seen is the Giant’s Causeway which is along the top coast of Northern Ireland. The landmark consists of 40,000+ hexagonal-shaped stones created around 60 million years ago.

Note: Images by team or from Canva or Pixabay.

May 2, 2020
See more articles in the Quizzes category