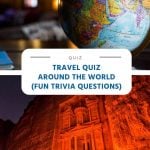 Try our fun “Around the World” travel quiz to see how many questions you can get. Simply pick which answer you think is correct from the multiple-choice options. You can use the button at the end to see which answers you got right and which you got wrong, as well as your overall score.

Once you’ve finished you’ll also find some more information about each place and question, allowing you to learn more. Good luck!

Quiz topic: Travel and destinations around the world
Difficulty: Medium-hard
Number of questions: 25

You may also like: Free Questions and Answers (For your Own Travel Quizzes)

Please note that you will need Javascript enabled on your browser for the quiz to work properly! 🙂

1. Where are the Whitsunday Islands located? 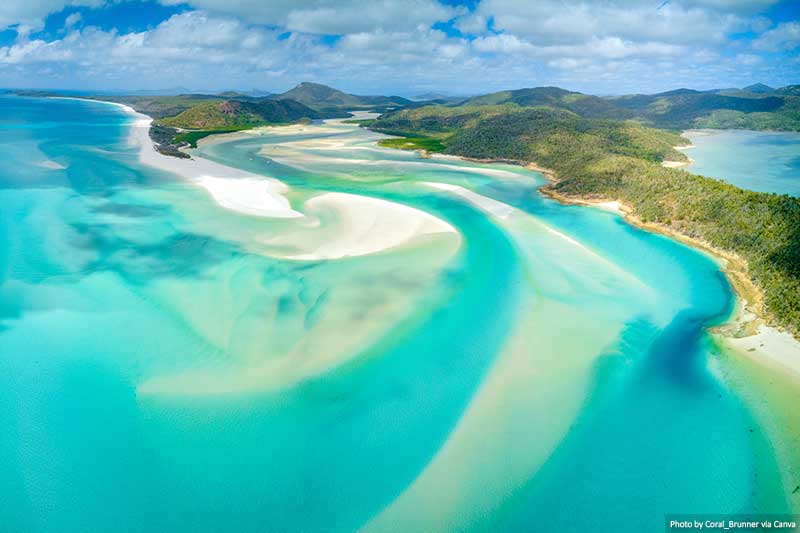 Malaysia
Vietnam
Philippines
Australia
The Whitsunday Islands are a stunning archipelago located near the Great Barrier Reef in Australia. Seen above is the Whitehaven Beach which is one of the most beautiful beaches in the world. Read more about stunning natural landmarks in Australia.

2. Which of these countries ISN’T landlocked? 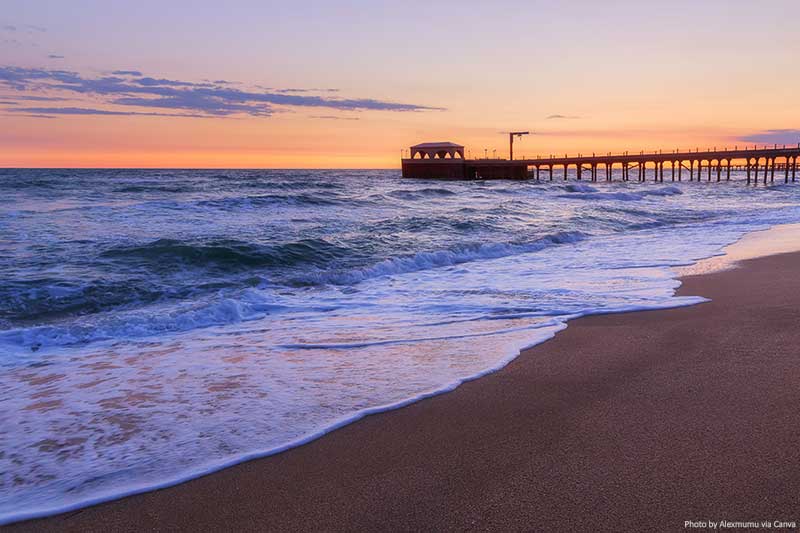 Nepal
Turkey
Armenia
Austria
Turkey is the only country in this list which isn’t landlocked. The country connects to various seas on its north, west and south coasts.

3. The Spanish Steps (seen below) are found in which city? 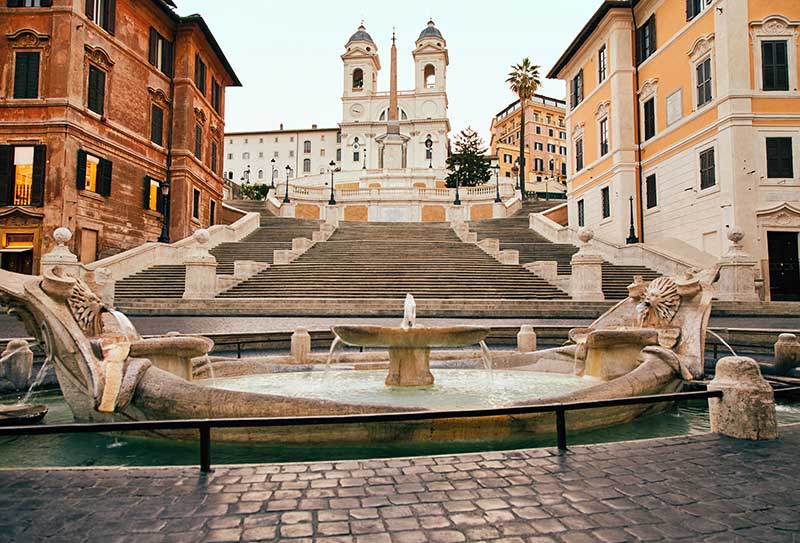 Rome
Barcelona
Madrid
Lisbon
Although the Spanish Steps could be confused as a place in Spain, they are in fact located in Rome. They were such named after the nearby Spanish Embassy and have been in the city since 1723. There are 138 steps which lead up to the Trinità dei Monti church located at the top.

4. How many provinces are there in Canada? 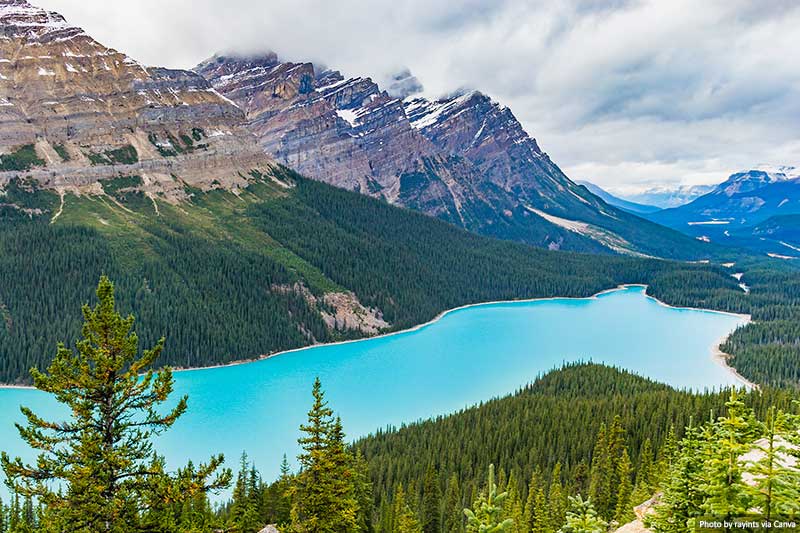 5
10
20
30
Canada has 10 provinces as well as three territories stretching across the country. The majority of its inhabitants are located in the more southern provinces near the Canada/USA border.
Discover some of the incredible places to visit in Canada.

5. Which two countries in South America are the Iguazu Falls part of? 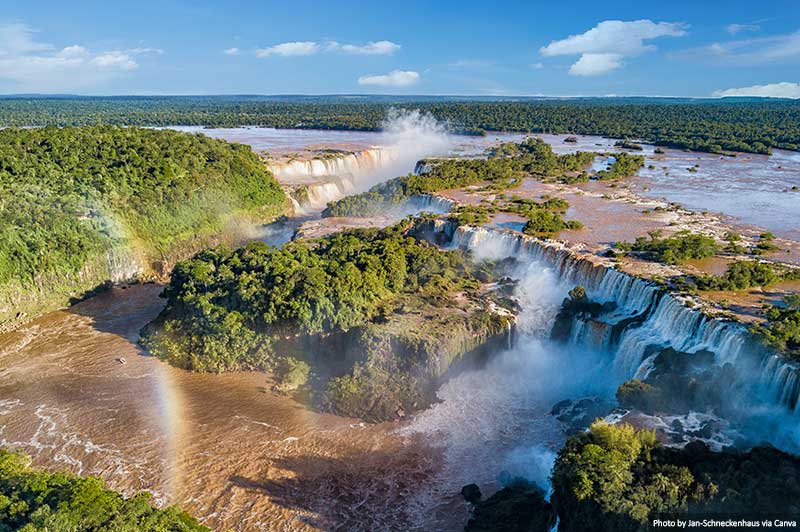 Ethiopia and Kenya
Switzerland and Italy
Brazil and Argentina
Tanzania and Zambia
Iguazu Falls is located on the border between Argentina and Brazil. It rises to a height of 82m and has a total combined width of 2,700m. Since 1984 it has been a UNESCO World Heritage Site.
See more places to visit in Argentina.

6. Which of these is NOT a South Africa national park? 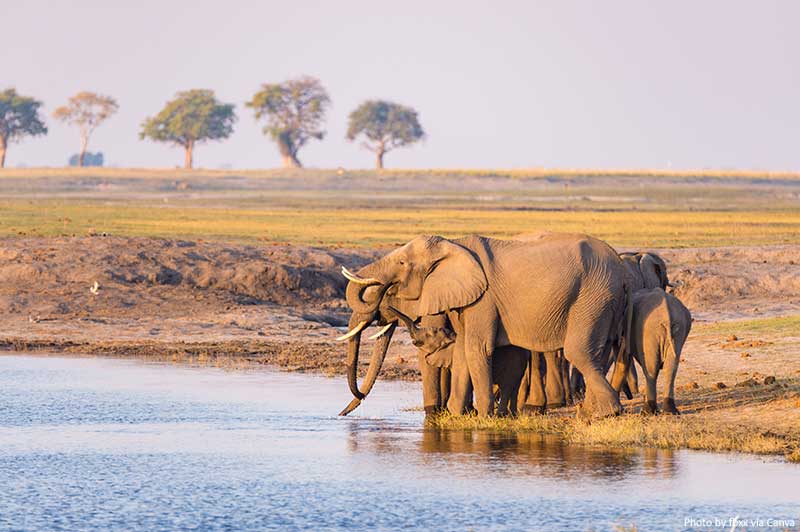 7. Where in the Middle East is this?

Qatar
Jordan
Egypt
Morocco
This is the Treasury in Petra, Jordan. It’s one of the country’s most famous landmarks and is likely to originate from the 1st Century BC. One of the highlights of many travellers is to visit Petra at night and see the front lit up by beautiful candlelight. Discover more wonderful places in Jordan.

8. The Aruba Caribbean island is a territory of which European country?

Oman
Netherlands
Finland
Croatia
Aruba is one of the many beautiful islands that form part of the Dutch Caribbean. These islands located near the Americas also includes Aruba, Curaçao, Sint Maarten, Bonaire, Saba and Sint Eustatius.

9. Where in Africa are these famous trees? (Avenue of the Baobabs) 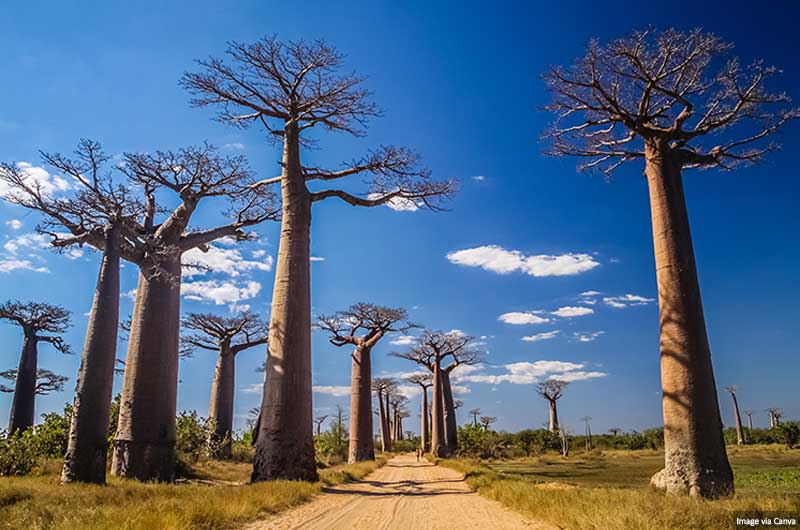 Australia
Turkey
Madagascar
Kenya
The “Avenue of the Baobabs” is a famous dirt road located in Madagascar linking the city of Morondava and town of Belo Tsiribihina. They are an iconic photo spot and particularly majestic at sunrise or sunset.
Discover more wonderful places in Madagascar.

10. What is the capital of Canada? 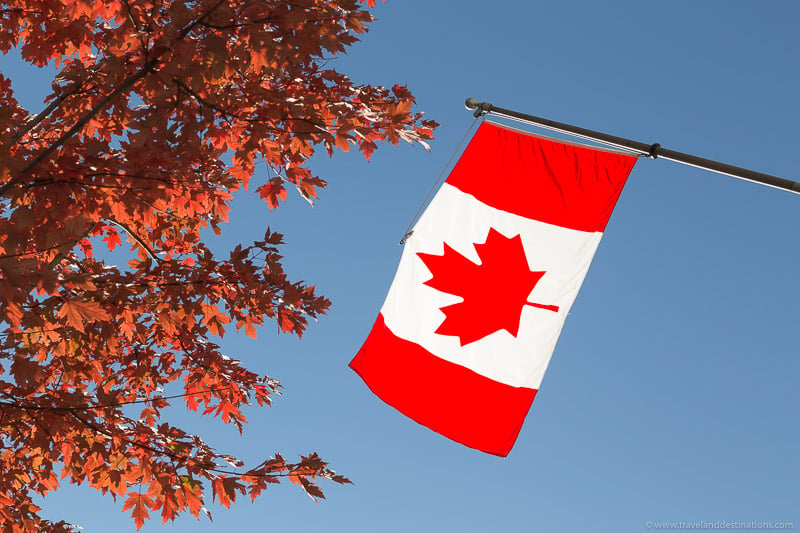 Toronto
Vancouver
Ottawa
Halifax
The capital of Canada is Ottawa which is located in the Ontario province. It’s a wonderful city to visit and popular highlights include the Parliament of Canada, Rideau Canal and a whole host of fantastic museums. Read tips for planning a visit to Canada.

11. Which country is this?
(Hint: It’s a place that is often seen on Instagram) 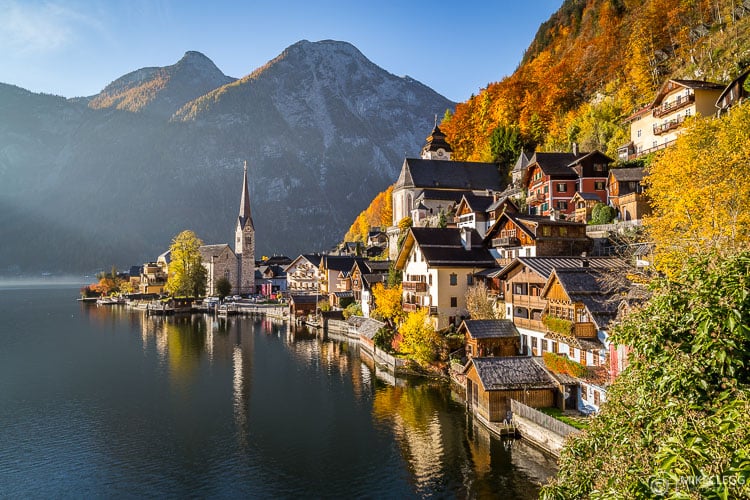 Norway
France
Croatia
Austria
Hallstatt is a beautiful lakeside town located in Austria. It is now a popular Instagram spot and attracts huge numbers of visitors each year. You can visit Hallstatt on a tour from Vienna or Salzburg, or get here yourself using public transport. Read more about Hallstatt.

12. Hanoi is the capital of which country? 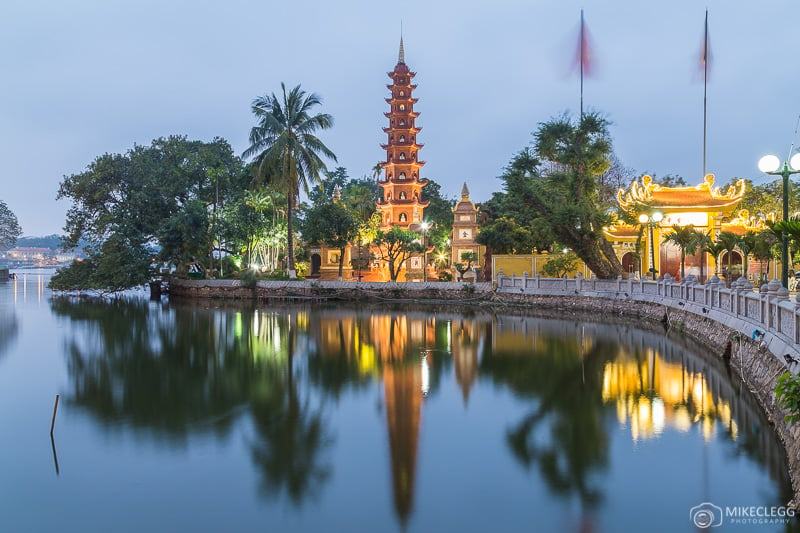 Cambodia
Laos
Thailand
Vietnam
Hanoi is the capital of Vietnam. The city makes for a great starting point when visiting the country to learn more about its history and culture before heading on to popular destinations such as Ha Long Bay, Sa Pa or Hoi an.

13. What is the official name of this tower? 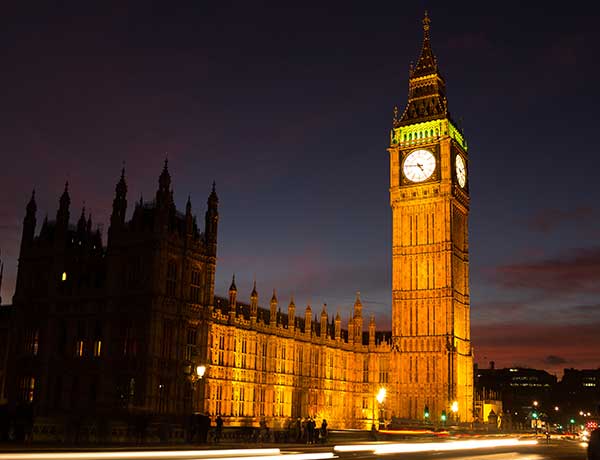 St Stephen’s Tower
Big Ben
Elizabeth Tower
The Victoria Tower
Although many people think this landmark is called Big Ben, actually that is just the name of the bell inside the tower. The official name is Elizabeth Tower. Previous to this it was simply called the Clock Tower. However, if you did refer to it as Big Ben many people will likely know what you’re talking about.

14. Where in Asia will you find this famous place? 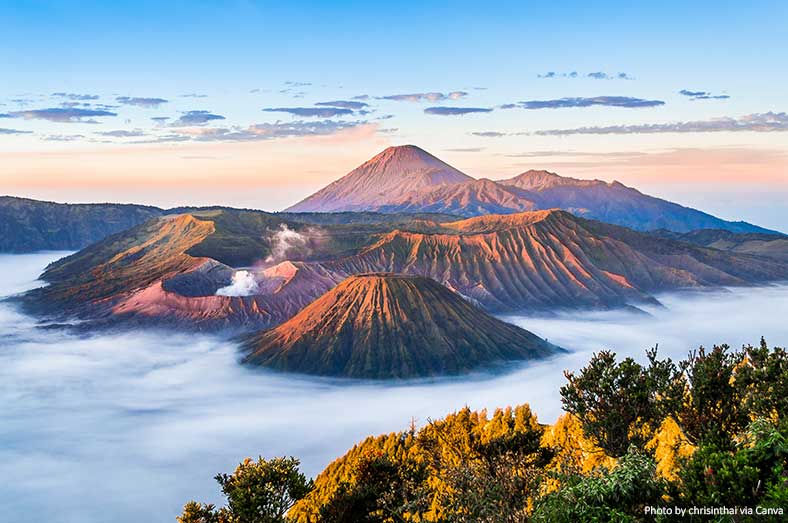 Indonesia
Ethiopia
Nepal
Mexico
Mount Bromo is a volcano located in East Java, Indonesia. It’s part of several volcanoes within the Bromo Tengger Semeru National Park. The landmark is a popular attraction to see during sunrise when you may see the mountain peaks poking out above a layer of cloud. Read more about highlights in Java.

15. What is the name of this popular middle eastern dish? 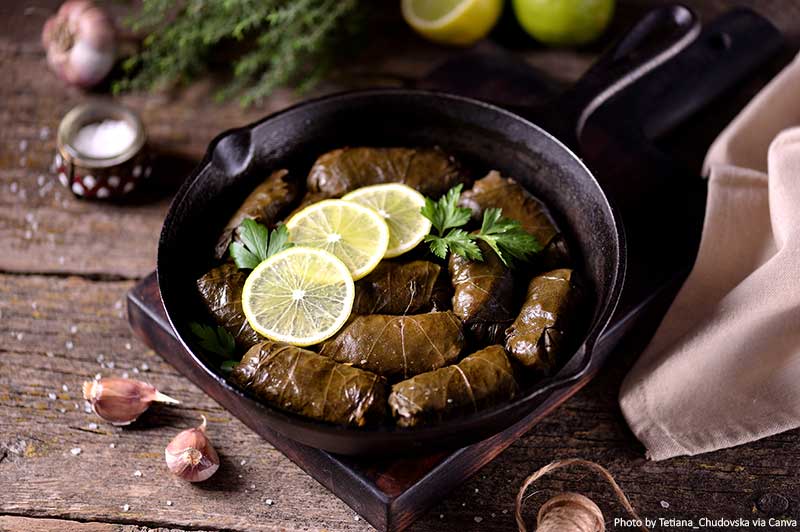 Hummus
Dolma
Pierogi
Falafel
This is Dolma, a popular dish found in Mediterranean cuisine and in the Middle East. It includes stuffed (or rolled) vine leaves and can contain mincemeat as well as various herbs and spices. There are also vegan/vegetarian versions with rice rather than mince.

16. Where in Asia is this famous place? (The Chocolate Hills) 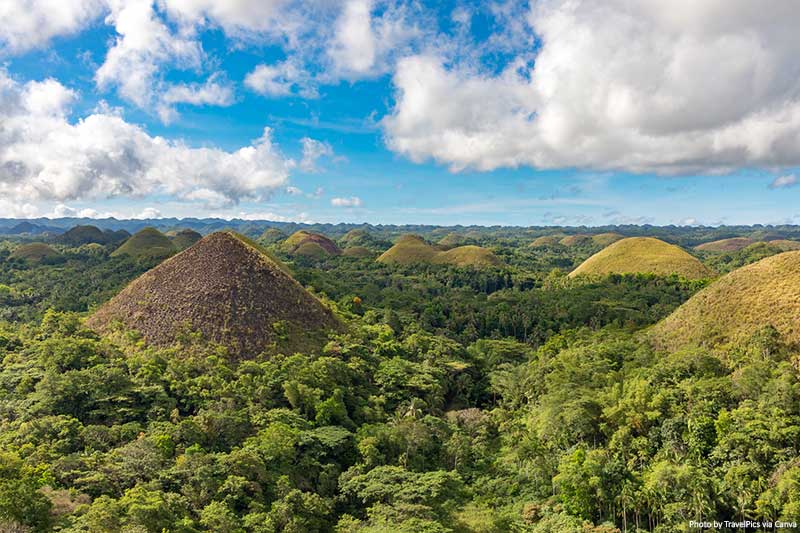 Pakistan
Colombia
Japan
Philippines
The Chocolate Hills are found in the Bohol province of the Philippines. They include over 1000 cone-shaped hills and are a major tourist attraction. Read more about places to go in the Philippines.

17. Which of these is the tallest?
(Hint: It’s not necessarily the image you see) 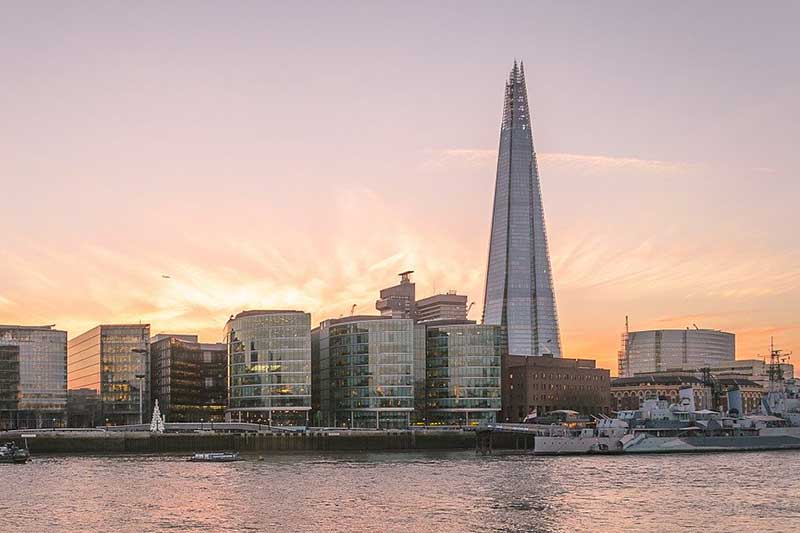 The Shard, London
Tokyo Skytree, Tokyo
Burj Khalifa, Dubai
Ostankino Tower, Moscow
The Burj Khalifa rises up to a height of 830m and is the tallest building in the world. It is a popular attraction in Dubai with an observation deck at 555m. The others in this list include the Ostankino Television Tower at 540m, The Shard (seen above) at 310m and the Tokyo Skytree at 634m. Read about incredible towers in the world.

18. Which of these cities ISN’T in New Zealand? 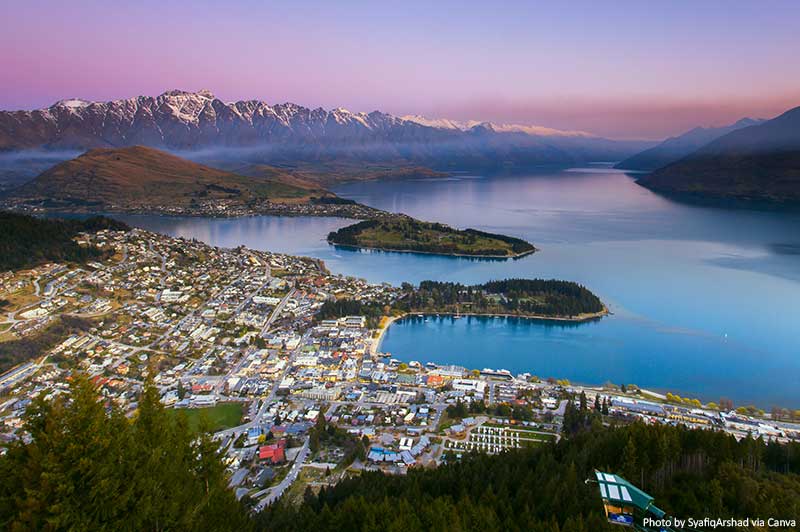 19. Which superhero movie was Niagara Falls used in? 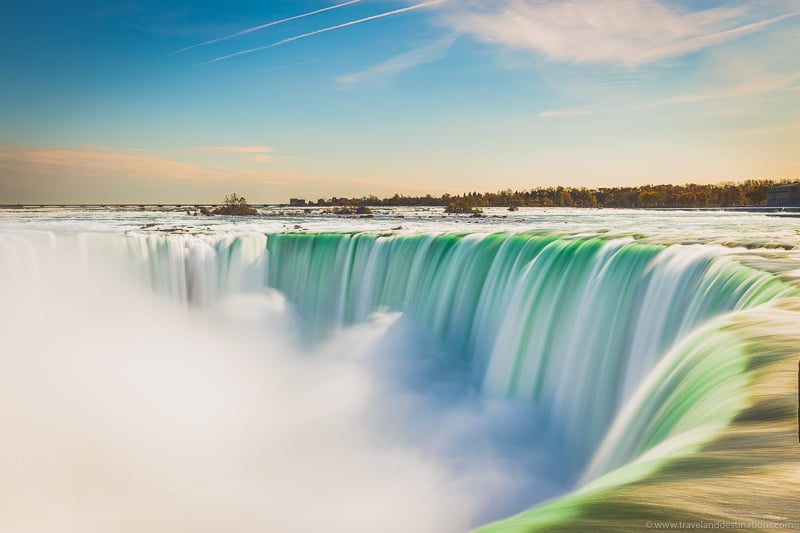 Batman
Gladiator
Fast and the Furious
Superman II
Niagara Falls was used for one of the scenes in the sci-fi movie Superman II. The waterfall is majestic and beautiful and a must-see for anyone visiting this part of North America. Read more about Niagara Falls.

20. How many countries connect to the Austrian border? 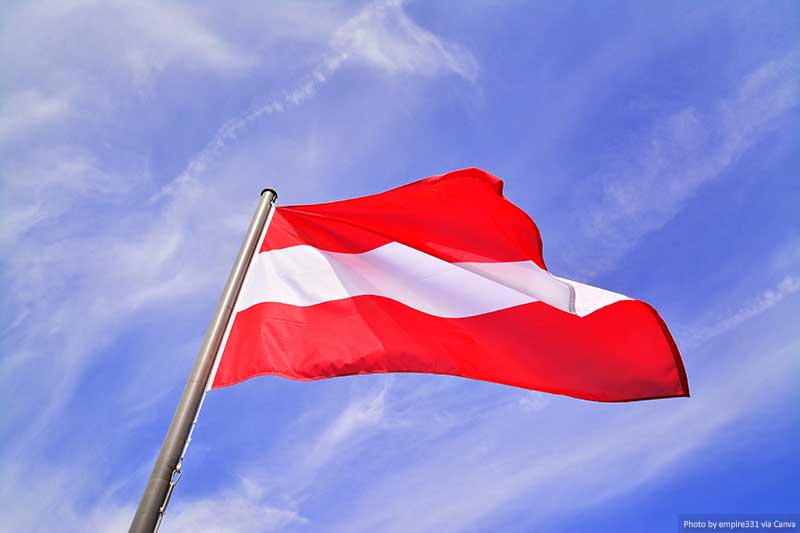 4
8
12
15
Austria is located in central Europe and borders 8 countries. These include Czechia, Slovakia, Hungary, Slovenia, Italy, Switzerland, Liechtenstein and Germany. Due to its prime location and excellent transport links this makes Austria a great destination to visit from nearby countries, or even as part of a multi-destination trip.

21. Where in Europe are these famous lakes? (Plitvice Lakes National Park) 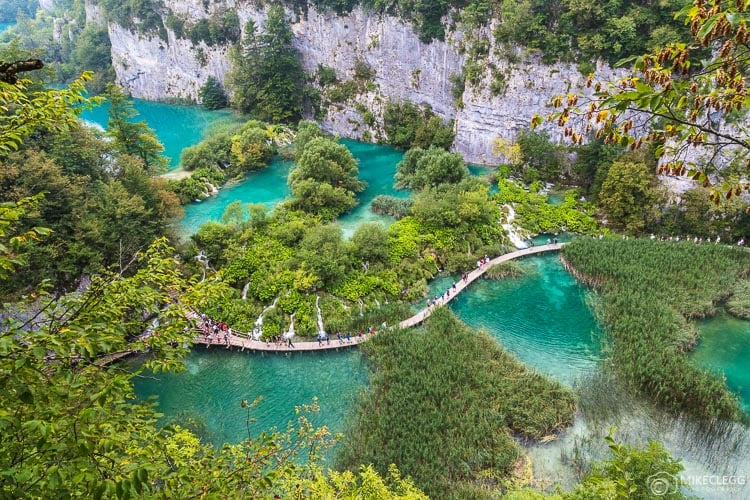 France
Switzerland
Croatia
Czech Republic
Seen above is the stunning Plitvice Lakes National Park which is located in Croatia. The park is an impressive 300 km2 and contains 16 lakes which have been divided into upper and lower lakes. When visiting various places in Croatia you can easily get here on day tours or using national buses. Learn more about the capital Zagreb and the Plitvice Lakes.

22. LOT is the national airline of which European country? 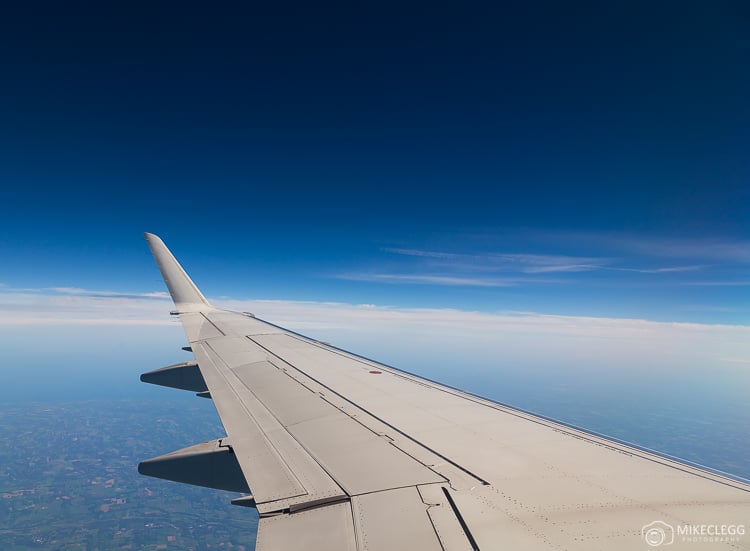 Italy
Latvia
China
Poland
Lot is the national airline of Poland and has connections to around 120 destinations. Such as major cities in Asia, North America and all over Europe.

23. The Baltic States refer to which countries? 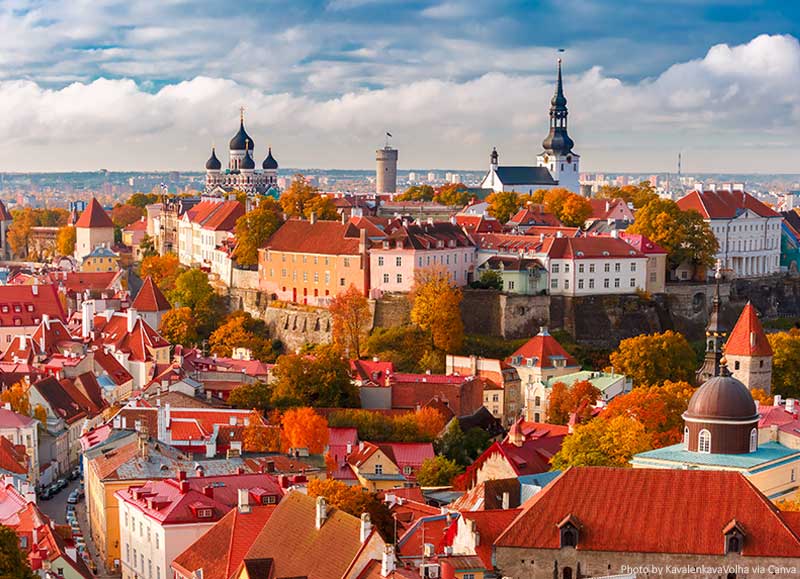 24. Bohemian Switzerland National Park is in which country? 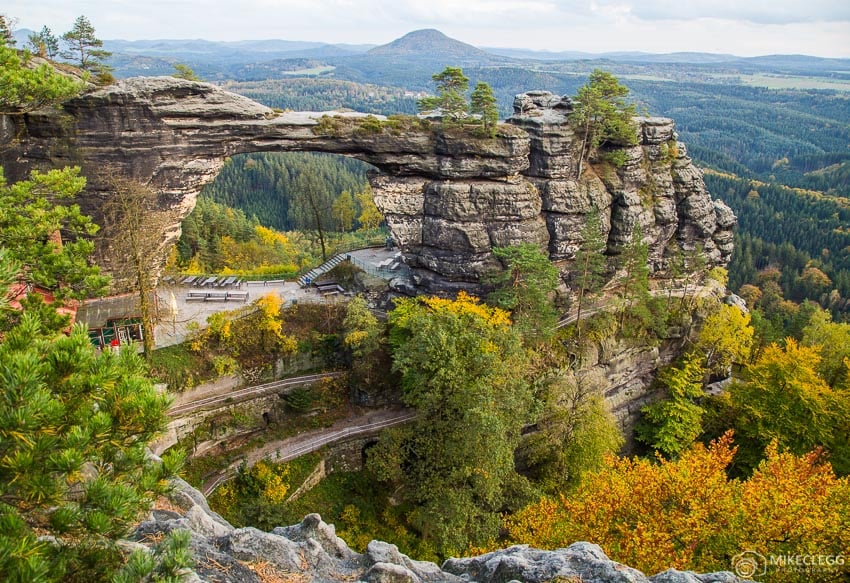 Germany
Netherlands
Czech Republic
France
Bohemian Switzerland National Park is another destination that could easily be confused by its name. The park is not located in Switzerland but in fact north Czech Republic. The park was named after two Swiss painters studying in Dresden who used to visit the park to paint it. It now makes for a fantastic day trip from Prague.

25. Final question – How high is Mount Everest?
(Hint: Think carefully about what would be a reasonable answer for the world’s highest mountain) 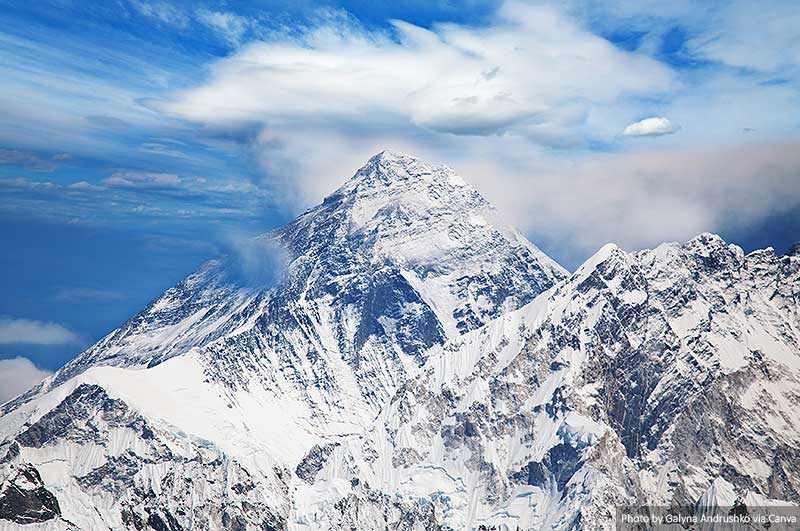 1,550 m
2,900 m
8,848 m
25,600 m
Mount Everest is the highest mountain in the world and reaches a height of 8,848m above sea level. The mountain is located between Nepal and China (Tibet) and is often tackled by adventure travellers and mountain climbers. 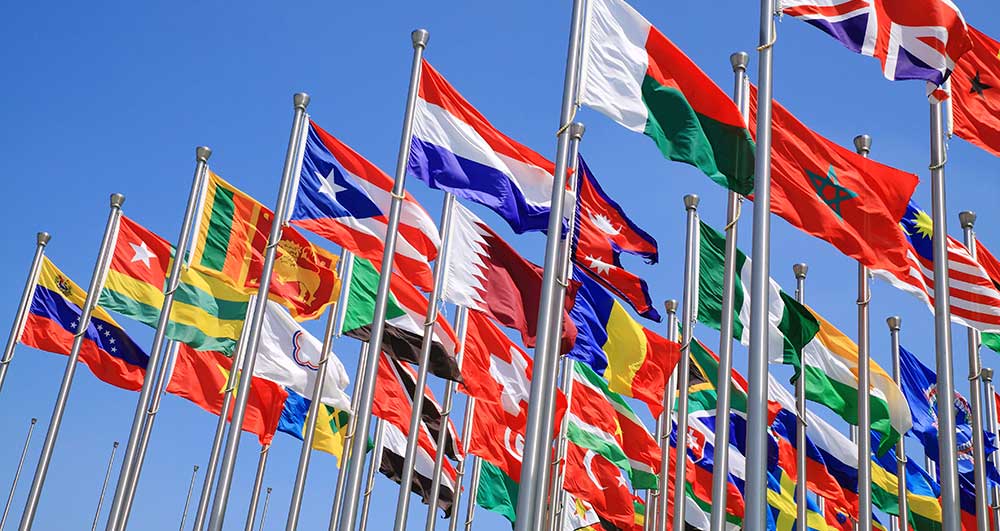