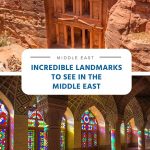 The Middle East is a place that was home to ancient civilisations and the region has a rich and diverse culture. In this part of the world, you’ll find breathtaking architecture and mostly sunny weather year-round. Here are 10 incredible landmarks to see in the Middle East and be prepared for the travel itch that will follow soon after.

A visit to Burj Khalifa is an ode to the modern. This structure is a contemporary example of the incredible achievement that man is capable of. It oozes luxury and wealth and attracts holidaymakers all year round. At over 828 metres and more than 160 stories, Burj Khalifa is the tallest building in the world. It also holds the record for the highest number of stories in the world. Amongst other things, at Burj Khalifa, you can enjoy jaw-dropping and stomach-turning views, enjoy gastronomic delights at the luxury restaurants, or relax at world-renowned spas whilst enjoying royalty treatment.

You may like
10 Incredible Towers to See Around the World

Located in southern Jordan, Petra is a treasure for anyone interested in historical architecture. The site attracts visitors from all over the world. It is real evidence of the lives of the Nabataean Arabs who existed some 2000 years ago and is thought to be the heart of their civilization.

Petra is fondly referred to as the Rose-Red city due to the colour of the rocks. From the ancient monastery site to the facade of the Treasury which dons the covers of travel literature everywhere, Petra is a place of wonder. You can fly into Amman and drive down to Petra, however, King Hussein Airport in Aqaba is closer.

The Giza Necropolis in Egypt, also known as the Giza pyramid complex is the site of the three pyramids, as well as the Great Sphinx of Giza. The pyramids rise against the dusty landscape and are striking even from a distance. From temples, statues, tombs and The Sphinx, there is a lot to discover and reflect on at Giza Necropolis. Not least how these vast, tall and grand structures were made with incredibly heavy stones so many years ago.

Read more:
10 Incredible Places to Visit in Egypt
You May Like

The Sheikh Zayed Grand Mosque is an impressive and awe-inspiring place that is one of the UAE’s most frequented attractions. The beautiful construction is the largest mosque in the country. The stunning domes and minarets, gorgeous tiles and white sun-reflecting structure is reminiscent of the palaces of fairytales and you will find much to explore and take in here. It is a wonderful backdrop against which to take some memorable pictures.

You may like:
Best Places to Visit Across the United Arab Emirates 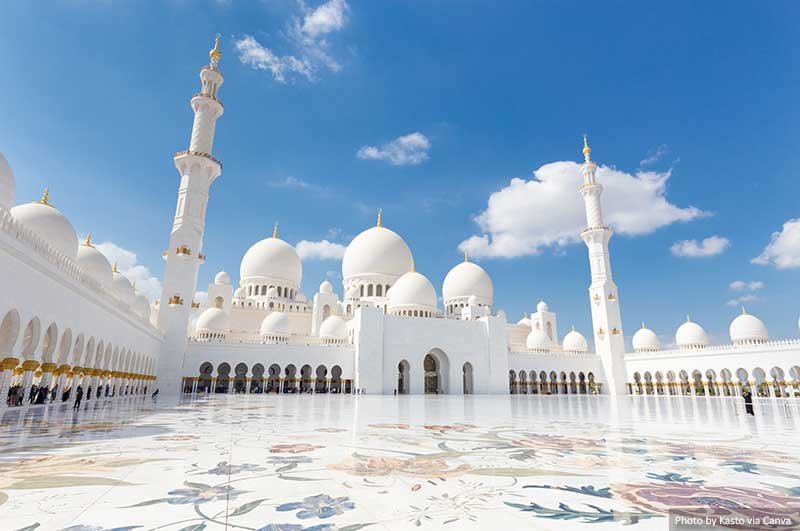 Goreme National Park in Turkey offers a whimsical and picturesque landscape. The region is fascinating since it is thought to be sculpted wholly by erosion. Gerome is situated close to the Open Air Museum. In addition, it is near Uchisar Castle which also offers stunning views of the region from its roof. The Pasabag Valley landscape to the north is known for Cappadocia’s “fairy chimneys”. These are the cone-shaped rocks dotted along the mountainside.

The whole region and its spectacular landscape all provide evidence of Byzantine art. This is in the form of homes, troglodyte villages and underground towns which can all be seen and explored by visitors. 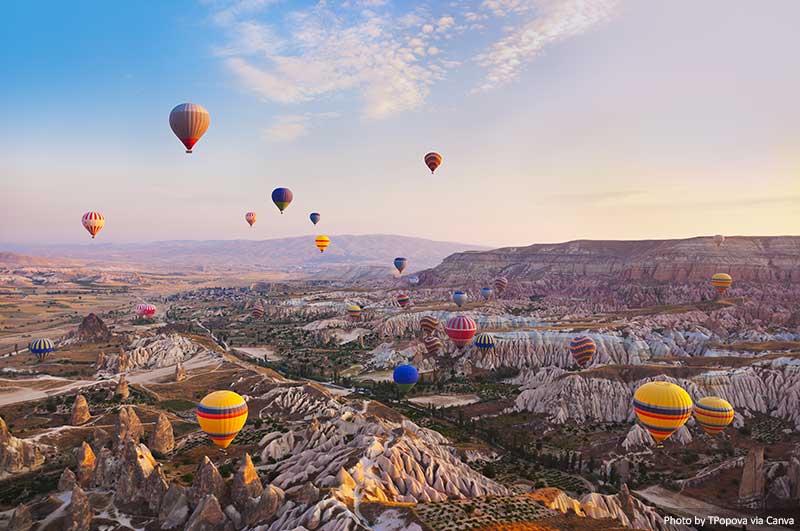 You may like:
10 Best Places to Visit in Turkey

The Nasir-ol-molk Mosque also dubbed the Pink Mosque due to the colour of its tiled interior is a beautiful and splendid structure that attracts visitors from everywhere. When the light shines through the windows, you feel as though you are sitting in the midst of a stunning rainbow. The warm glow all makes for a peaceful and comfortable mosque interior that feels welcoming to all who walk through its doors. It is a must-visit for anyone embarking on a journey around the middle east. Jerusalem is long celebrated as the heart of the Abrahamic faiths. Judaism, Christianity and Islam all have roots in this glorious and ancient city. Travellers to Jerusalem can either cross the Allenby-King Hussein bridge which is just an hour from Amman or fly straight into Tel Aviv and make their way to Jerusalem from there.

Jerusalem is breathtakingly beautiful in every way. The old city, in particular, is particularly whimsical. With the narrow alleyways, numerous steps and cobbled streets, it is a place filled with nostalgia. It is hard to ignore the presence of soldiers which makes clear that it is a city under occupation. However, it is a place where life thrives and continues every day, and tourists continue to pour in all year.

The heart of Jerusalem is, without doubt, the Al-Aqsa compound. The compound is beautifully serene, filled with olive trees and beautiful stones and the glorious Dome of the Rock can be spotted from a great distance too. The call to prayer rings out at every prayer, and locals, as well as religious pilgrims,  can be seen flocking to the mosque. There are guards at the door to the compound which don’t always let tourists in. They are allowed to enter one day in the week, usually on Sunday, but this may be subject to change at any given time.

Jerusalem is a great place to try Palestinian cuisine. From hummus and falafel to delicious shawarma and sweet, juicy kunafa, your tastebuds will not be disappointed here. There are a few restaurants opposite the Damascus gate which always impress with the quality of food and service.

Read more:
10 Best things to See and Do in Jerusalem

For those who want luxury in the open air, Wadi Bani Khalid is a must-visit destination. This extraordinary oasis lies in the midst of mountains. The water, in particular, is known for its emerald green colour. It is irresistible to dip into, especially during the hotter months. The views from the water are incredible. Age-old mountains, beautiful springs and tall date palms all look down onto this wonderful Wadi. As you pass through Oman, Wadi Bani Khalid is the place to spend a relaxing day.

You may like:
10 Best Places to See and Things to Do in Oman 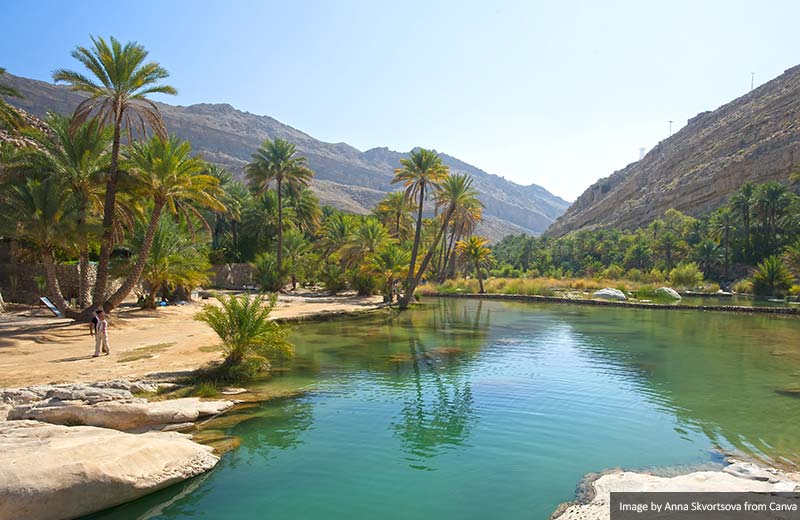 The Blue Mosque in Istanbul is also known as the Sultan Ahmed Mosque. It has been dubbed the Blue Mosque due to the colour of the tiles which are admired within its walls. The mosque is one of the most iconic buildings in the world and is recognised as one of the most spectacular places to visit in Istanbul. This place still operates as a mosque, which also highlights its significance in Turkish and Islamic culture to date.

Read more:
10 Best Things to See and Do in Istanbul 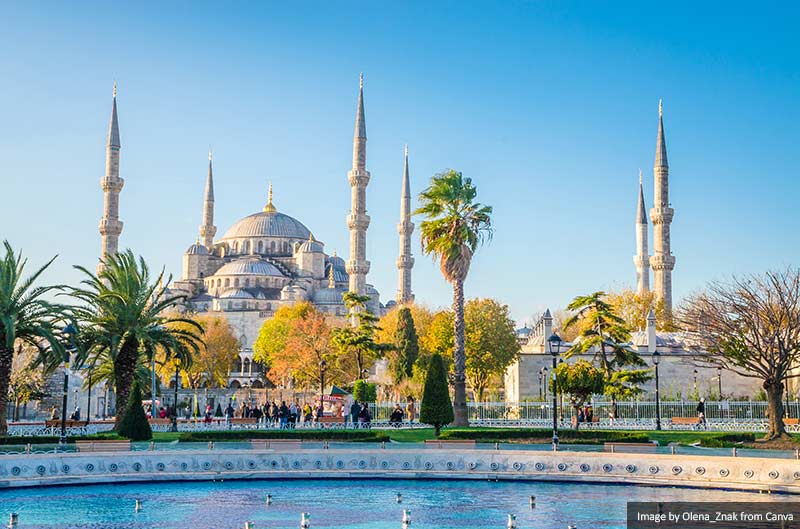 Mada’in Saleh is home to the second city of the ancient Nabataean Arabs and a UNESCO World Heritage Site. Located in the western Hejaz province of Saudi Arabia, it is a vast archaeological site that would attract far more visitors if it were located anywhere else in the region. Mada’in Salah encompasses some 111 monumental tombs, 94 of which are decorated with wonderful facades. The tombs vary in size, with the smallest tomb being 2-3 meters and the largest being almost 22 meters.

The site also has places called triclinium. These are like modern diwans, dedicated to dinners, rituals and banquets. At least six of these were found in Madain Saleh, with the famous one being in Jibal Ithlib.

The Middle East is a region filled with landmarks that are both historical and modern. Exploring these sites will leave you in awe of what mankind can and has achieved. From the luxurious tower of Burj Khalifa in Dubai to the historic site of Petra, there is much to see, contemplate and indulge in. An adventure through the Middle East will give you a more authentic insight into the real stories of the people and places in this region, past, present and future.

Professional Writer
Faz is mother and writer who loves travelling and has spent time in several countries across the globe. She is an enthusiast for all things cultural and linguistic and also works as a translator.[Read full bio]
If you would like to write a guest article so as to raise your profile then please get in touch.
Noticed a mistake? Let us know. 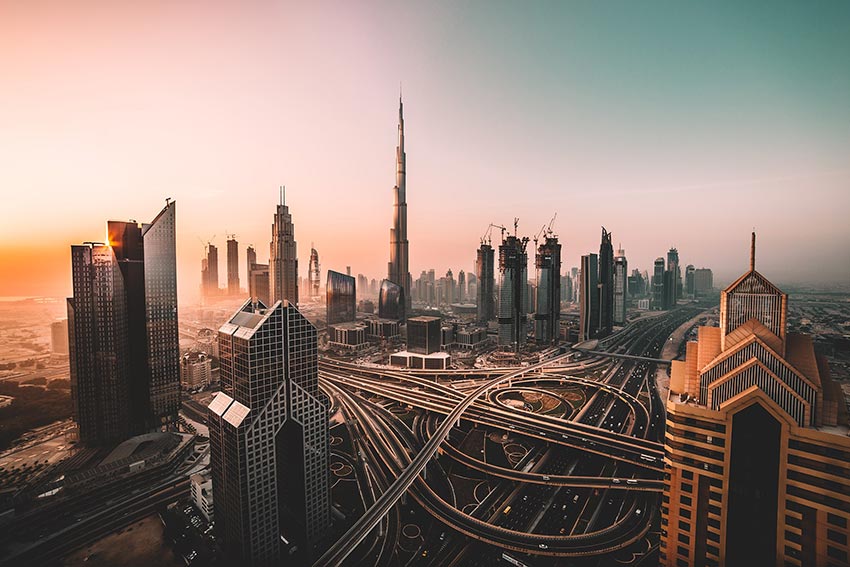 15 Best Things to See and Do in Dubai 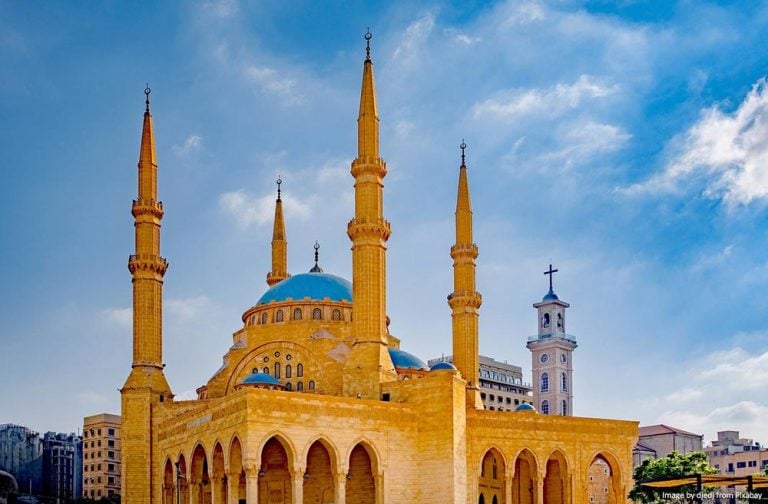 10 Best and Most Beautiful Places to Visit in Lebanon